Below are my lectures on git. It is a playlist of videos. Watch them all.

Set you name and email. Make sure the email you use is also listed in your github account. 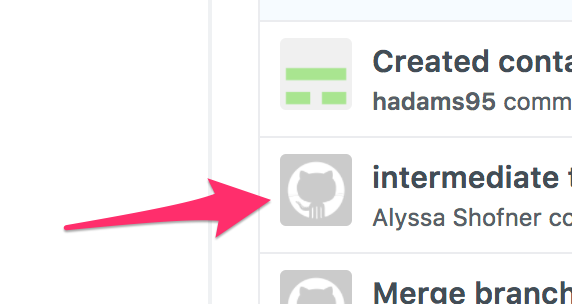 If your email in git does not match one of the emails associated with your github account, then when you push and look at the log in github your avatar will be grey, as shown here. If you see that grey octocat next to your commit it means you did it wrong. Setup your git email as above. Make sure the same email address is part of your github profile. Then do another commit and push it. Make sure the avatar for the new commit is not the grey octocat.

When you are learning git for the first time, I recommend everyone simply use the master branch. Just make sure you frequently commit+pull+push your changes. Many teams do this for the entire first semester (490) as they get comfortable with git.

The playlist below explains how to use the JetBrains IDEs for git and github. Watch them if you are using Android Studio, or WebStorm, or PyCharm, or any one of the Jetbrains IDEs. They are all very similar when it comes to git.

The git commands you need are the following.

To create a branch named jmvidal do:

To checkout my branch

To keep updated on the shared code, do this often

To merge the jmvidal branch into master, without doing a Pull Request at GitHub, we do:

To share my branch with others, so they can see what I am doing now

To pull in my teammate's branch from github to my laptop, the first time I do

I now have a branch called his-branch-name in my laptop which tracks the same named branch at github. Later on, if he adds more changes to his branch, pushes them, and I want to download them, I just:

To delete my local jmvidal branch do:

To delete my tracking branch origin/jmvidal do

To delete my jmvidal branch at github do (this can also be done at github.com with just a click)

If you are in the middle of something, don't want to commit, but want to pull in the master branch just stash your code and pop it later. Assume that we are in the jmvidal branch, then:

You have changed some files but decided all those changes are wrong. You just want everything to go back to where you where on your most recent commit. Simply

Your current branch and HEAD will now be at 5da03e94. It will be like the other two commits never happened.

To clone the github wiki git repo (that is, your wiki) locally you just add .wiki in the repo name. For example, if the repo is called demo and you use:

to clone it, then you can clone its wiki using

To add images, just add them in a new directory and then push. see this stackoverflow question for details.